Testbed: two identical machines, one as client and one as server. The characteristics of machines and the network can be found in the Methodology page. 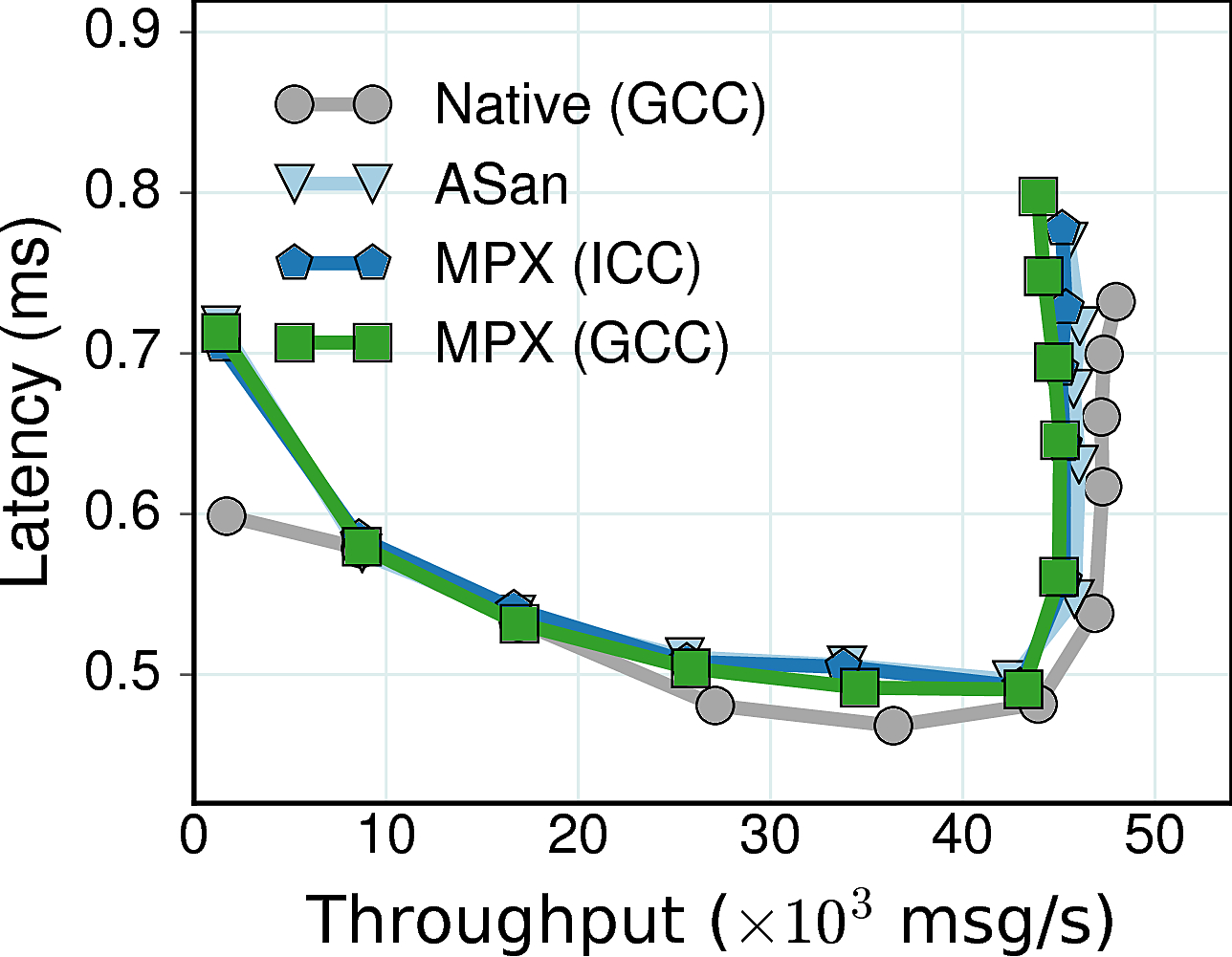 Performance Summary: GCC-MPX, ICC-MPX, and AddressSanitizer all show minimal overheads, achieving 95.3%, 95.7%, and 97.5% of native throughput. Overhead in latency did not exceed 5%. Such good performance is explained by the fact that our experiment was limited by the network and not CPU or memory.

Memory Summary: AddressSanitizer exhibits an expected 3.5X overhead. In contrast, MPX variants have dramatic 12.8X increase in memory consumption. This is explained by the fact that Apache allocates an additional 1MB of pointer-heavy data per each client, which in turn leads to the allocation of many Bounds Tables.

Note. The actual situation with Heartbleed is more contrived. OpenSSL uses its own memory manager which partially bypasses the wrappers around malloc and mmap. Thus, in reality memory-safety approaches find Heartbleed only if the length parameter is greater than 32KB (the granularity at which OpenSSL allocates chunks of memory for its internal allocator). More info.

Issue 1: While testing against Heartbleed, we discovered that ICC-MPX suffers from a run-time Intel compiler bug 5 in the x509_cb OpenSSL function, leading to a crash of Apache. This bug triggered only on HTTPS connections, thus allowing us to still run performance experiments on ICC-MPX. See bug here.

Performance Summary: AddressSanitizer reaches 95% of native throughput, while GCC-MPX and ICC-MPX lag behind with 86% and 89.5% respectively. Similar to Apache, this experiment was network-bound, with CPU usage of 225% for native, 265% for MPX, and 300% for AddressSanitizer. (CPU usage numbers prove that HW-assisted approaches impose less CPU overheads.)

Summary: AddressSanitizer detects this bug, but both versions of MPX do not. The root cause is the run-time wrapper library: AddressSanitizer wraps all C library functions including recv, and the wrapper – not the Nginx instrumented code – detects the stack buffer overflow. In case of both GCC-MPX and ICC-MPX, only the most widely used functions are wrapped and bounds-checked. That is why when recv is called, the overflow happens in the unprotected C library function and goes undetected by MPX.

Issue 1: To successfully run Nginx under GCC-MPX with narrowing of bounds, we had to manually fix a variable-length array name[1] in the ngx_hash_elt_t struct to name[0].

Issue 2: ICC-MPX first crashed with a false positive in ngx_http_merge_locations function. The reason for this bug was a cast from a smaller type, which rendered the bounds too narrow for the new, larger type. Note that GCC-MPX did not experience the same problem because it enforces the first struct’s field to inherit the bounds of the whole object by default – in contrast to ICC-MPX which takes a more rigorous stance. For our evaluation, we used the version of ICC-MPX with narrowing of bounds disabled. 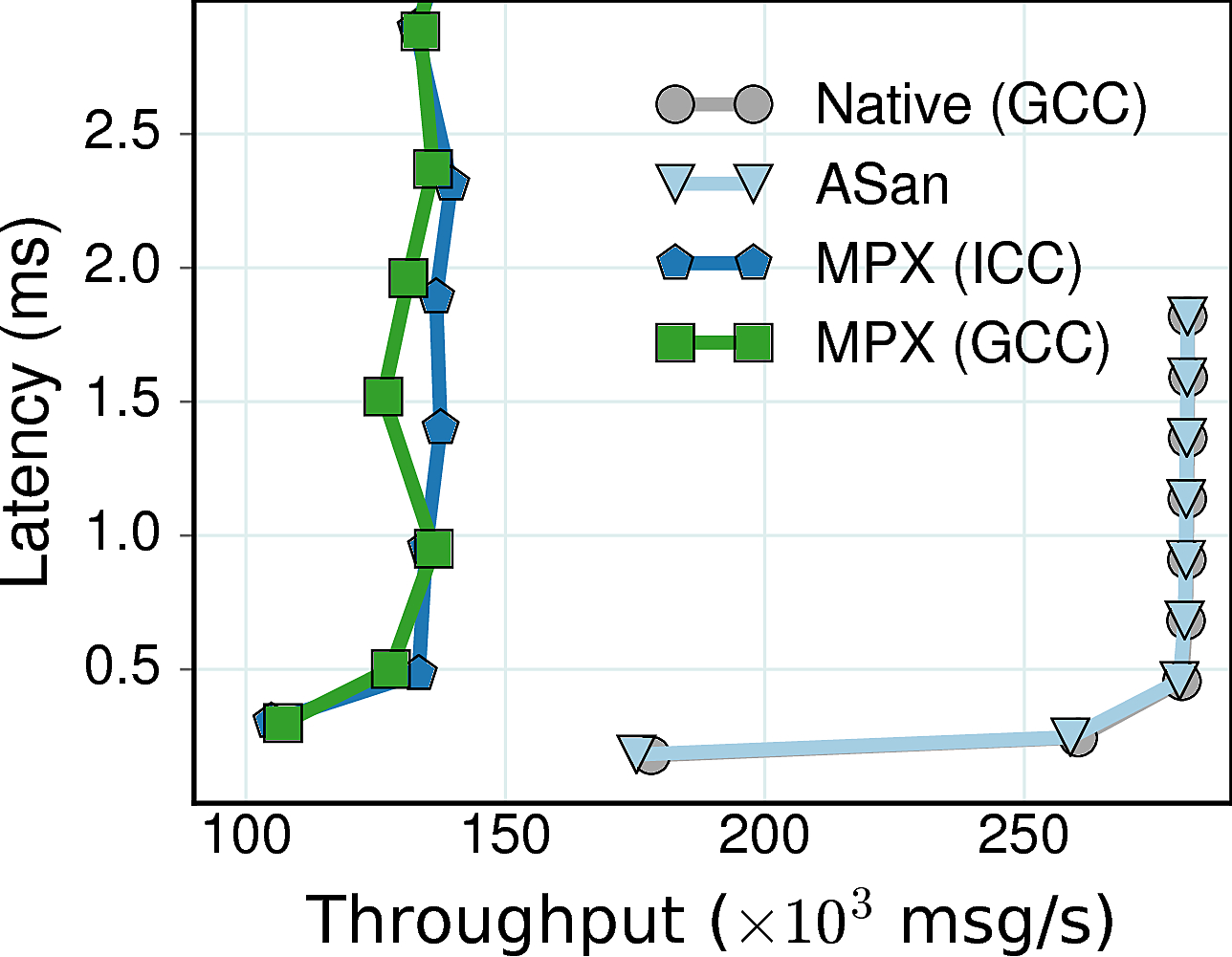 Performance Summary: AddressSanitizer performs on par with the native version. Both GCC-MPX and ICC-MPX achieved only 48−50% of maximum native throughput. In case of native and AddressSanitizer, performance of Memcached was limited by network. But it was not the case for MPX: Memcached exercised only 70% of the network bandwidth.

Summary: All approaches detected buffer overflow in the affected function’s arguments and stopped the execution.

We experienced no usability problems.